and other stories, including eggs on eggs

There are a few women that I would like to adopt as my aunts have adopted as my aunts, but they just don't know about it. Madhur Jaffrey, Ina Garten, and now, Niloufer Ichaporia-King.

The common connection to all these women is quite obvious. I came to follow Ina through her TV shows, Jaffrey through her books, and with Niloufer, it was first her book that drew me in, and it was capped off by getting to know her in person. Yes, some serious name dropping can now happen! They all write beautifully about the subject close to their heart, and best of all, give you a wealth of recipes that work every single time. 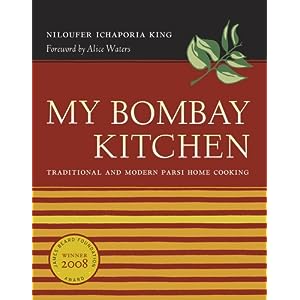 The first time I heard about "My Bombay Kitchen" was when a friend sang praises about a new book she had stumbled upon in the library. So I decided to check it out, and just fell in love with it. The writing is beautiful and evocative, erudite, but not stodgy, unexpectedly humorous, full of great advice, and always informative. While reading through it, I have literally tugged at the person next to me saying "Just listen to this ...".

The book is sub-titled "Traditional and Modern Parsi Home Cooking", and is based primarily on Niloufer's Parsi heritage, from her experiences growing up in India, and her continued research after she started living in the US. So a lot of the recipes in the book include family favorites, but since she is a big advocate of farmers markets and adapting local ingredients, there are many interesting variations, along with her discoveries in foreign lands, and interpretations from her über chef friends. With loads of wit and wisdom packed into its pages, and recipes that work perfectly, this soon became my favorite cookbook in recent years. Her husband David has done the most adorable illustrations throughout the book, which really pull everything together and complete the package. Over and above, the fact that Niloufer is such a charming person is just the jewel in the crown.

So far I have tried countless things from the book, each delicious, and many more are begging to be made. Her panir is quite a standout. I used her recipe to make regular paneer for cooking many times, but then I had the pleasure of having it served soft, with a warm flatbread with hints of ajwain and ever since I almost always have some fresh soft panir in the fridge. As Niloufer would say, we like to fool around with it.

Among other things that are on regular rotation in the Evolving kitchen are the Wafer Par Ida and Kasa Par Ida. The recipe is available on many sites, including here, so I will paraphrase just a bit.

Niloufer writes that for years she thought it was a joke recipe, a loony fantasy or a way of lampooning the Parsi love affair with eggs and potato chips, until she tried it and found it to be absolutely delicious. I agree about the deliciousness part! Very rarely do I buy potato chips, usually only when I have little kids around. Inevitably there are crushed up chips or pieces in the bottom of the bag, that no one eats, and the wafer par ida is the perfect use for them. I have used various different types of chips too, and it is always good. Heat the ghee over medium heat in a sturdy medium skillet.

Add the onion and let it soften, stirring occasionally, a few minutes. Before it browns, add the paste if you like and the green chiles, and as soon as the mixture looks cooked, add the fresh coriander. Crumble in the potato chips, tossing the contents of the pan to combine them thoroughly.

Make nests in the surface of the mixture, and crack an egg into each. Pour a tablespoon or so of water around the edges of the pan to generate some steam, cover the skillet tightly, and let the eggs cook just long enough to set the whites without turning the chips soggy. This usually takes me just about 3-4 minutes on very low heat.


Kasa par ida (Eggs on Anything)

Wafer per eda is almost like a corollary of kasa par eeda. I have literally taken the idea of the 'kasa' (anything) to heart and tried it many ways. It always works for me as a quick, satisfying, and comforting meal when I have completely run out of ideas and strength for anything else. Niloufer says that sometimes it's a hastily improvised dish that appears as part of the evening meal and what goes under the eggs is left to the imagination. Like a giddy child I told her some of the things I have done, and she approved with a slight nod and her majestic smile.

So, what have I put this on and enjoyed? Here are some from my list:

Here is what some of my favorite bloggers have to say about the book:

The Cooker: I knew I had to have it
Mints: Niloufer's writing style is very casual but very informative
Manisha: Favorite Parsi cookbook author
Melissa: I've made not one, not two, but seven spectacular dishes

Here are some more:

If you have a good blurb on your blog about 'My Bombay Kitchen', and want to list it here, just let me know at evolvingtastes[at]gmail[dot]com
Posted by evolvingtastes on 8/05/2010 11:38:00 AM

Now I want to get my hands on the book, your description's piqued my curiosity, as has the eggs on chips picture!

sra, I am almost sure that you will enjoy this book. Check it out, and I'd like to know what you think too!

Such a great review! But the book truly deserves it and more! And how lucky you are, to know Niloufer beyond these pages. :-)

I love "per eda" recipes the fav being okra!

I've had two posts on my blog but at a time when I only blogged in French:
http://bombay-bruxelles.blogspot.com/2009/02/gateau-la-cardamome-et-aux-amandes.html

The books sounds from your description. Th combination of eggs and potato chips looks good. The recipe has an interesting name too :)

I have also added your blog to my blog list: http://myculinaryexplorations.blogspot.com/

sounds like a wonderful light read filled with lots of great recipes. cant wait to pick up this next from the library.

I tell you - the Parsis really know how to enjoy food! Growing up in Mumbai I often ate at a neighbours house and attended Parsi weddings and it was absolutely amazing at the attention to detail and deliciousness!

This one looks picture perfect - like the eggs cant wait to be cut into and spill all their eggy goodness over the crisp wafers!

Manisha, indeed, getting to meet Niloufer was an amazing experience!

B-B, thanks for those links. Wish I could read French, but I am so glad that you are now translating your posts!

Supriya, thanks, I appreciate it.

PJ, highly recommend! Would like to love to know what you think about it too.

Miri, how lucky to be able to attend Parsi weddings. Food is truly the highlight there.

Made some bread par ida today after reading your post. Quick, easy, delicious and can be adapted in so many different ways! Thanks for sharing this recipe, ET!

mi.p, thanks for stopping by to let me know. Spot on!

Made this. Was delicious. Thank you.

Radha, thanks for letting me know! Glad to hear you enjoyed it.

I found it! What a great post. I love the "egg and egg" - we found that on a sandwich in Vienna, to our great amusement. And what a twist on the old British "egg and chips"!

Ilse, ah yes, at Trzesniewski? I did stop by there for lunch one day and was smiling when I noticed it in your post.

If you feel adventurous, give these Indian egg and chips a chance. It doesn't need any special spices, and you can easily cut down on the green chilies.