Prepping for a potluck

It was a much awaited event last week. A potluck dinner event where I was to meet many people, some of whom I know well, some of whom I had never met before, and others in between. Many of them foodies.

When the menu was being planned, I declared two dishes that I could bring - usaL and kobichyA vaDyA. I selected the kobichya vadya because every time I have made it for guests, I have received favorable comments and recipe requests. It is also one of my own favorite things to eat. The humble cabbage elevated with lots of different spices ground together. Usal was just one of the things that came to mind that is easy to scale for a crowd.

While most people make usal with one type of bean, I like to combine two or more types of beans. I chose matki, moong, and whole green masoor. Since the dinner was on Saturday, I soaked the beans on Wednesday. The next day I tied them up in a bundle, and by Friday I had beautiful sprouts. 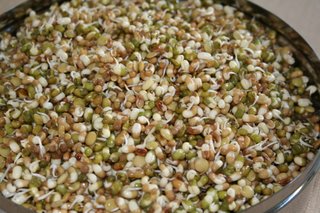 That is when the anxiety began. I do not have a specific recipe for usal, and every time I make it with a different combination. Sometimes I add curry leaves in the tadka, sometimes I add onion, sometimes ginger and garlic, and so on. So what would be the best combination to make for a crowd? I got frantic. I called up my cousin and she said 'no tamarind in usal, never'. So I send some emails to friends who are great cooks. 'oh of course tamarind, always'. Phew. That is what I do too.

Eventually, the usal was yet another take as usual. I added onion, and also tamarind and jaggery. And goda masala, lots of it. I have never before made such a humongous amount of usal and had to stir it around super carefully, to avoid breaking the sprouts without breaking my neck. I tasted a little, and it lacked a certain something which a friend assures me can be taken care of by adding 'kanda lasun' masala. So I added that at the end, and checked again, and it was just right. Not too dry, not too watery. 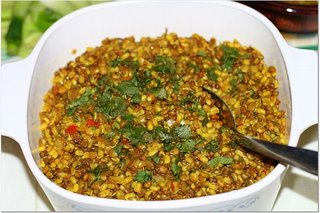