'Long time no pohe', was the refrain heard around here a few times. I knew it was true, and there was no excuse for it to be true either. Making pohe is simple, it tastes good, and it makes for a light and delicious breakfast or snack any time of the year, but not being too high in my list of favorites, it sometimes takes a backseat in the kitchen. I enjoy it every once in a while, and that is about it. While I am open minded (really!) about most things and don't mind trying all kinds of variations when I am cooking, I am rather finicky about the way I like my pohe. First of all, I like it to be well balanced in terms of the spice, tartness, saltiness and sweetness. The under-seasoned bland version isn't for me. For reasons unknown, I also don't like cumin seeds in pohe, and I much rather prefer red Indian chili powder to green chilies. What a whine, eh! I won't complain if someone made it some other way and gave it to me on a platter, but you get my point.

Growing up, pohe was a weekend ritual of sorts, and over the years, adding some kind of vegetable also became the norm. Usually peas, when they were in season, sometimes carrots or potatoes, but coming full circle, I now prefer pohe with onions, and without any other vegetables, which is called as 'kande pohe', in marathi, and only occasionally the potato version, or 'batate pohe'. Having said that, this time I added some succulent early summer corn, and it was great.

A combination that was possibly peculiar to our household was that of serving roasted papads alongside. Haven't heard of it? Outside of our family, neither have I, but there have been many converts to this combination, after having eaten it at our place. The papad of choice at home was usually poha papad (pohyAche pApaD), and the crispness of papads went perfectly well with the soft and chewy pohe. This is a tradition I have carried over, but have to make do with whatever papad is available on hand. Other things that were served alongside were grated coconut, chopped cilantro, and a small bowl of tamarind juice, for those who wanted to add some tartness to their pohe, and I suspect some of these too were somewhat non standard.

In Marathi, poha is singular, and would mean just one flake, and pohe is the plural, but I have always seen bags of it in Indian grocery stores labeled as 'poha'. So that is what you would look out for, in case you are unfamiliar with these rice flakes. For this particular recipe, I prefer to use 'extra thick' pohe, as sometimes even the ones labeled as 'thick' are not thick enough. 'Medium' or 'thin' pohe are not used here, they have other uses.

Serves 2-3 for a light breakfast

Place the pohe in a fine meshed sieve, and run it through tepid water until completely wet. Place it over a bowl, with a lid on so that it stays moist and plumps up, for 15 minutes to half an hour.

In the meanwhile, slice the onion thinly cross-wise, then chop it further to make small and thin slices. With a sharp knife, remove the corn kernels from the cob.

When ready to start cooking, loosen the flakes of pohe with fingers so that they are separate and there are no clumps.

Heat the oil in a large pan, and add the mustard seeds to it. When they start to pop, add the asafoetida, turmeric, curry leaves, onion and corn. Saute together for a few minutes until the onion has softened. Add the pohe, chili powder, salt, and sugar. Reduce the heat, and stir everything together until the pohe are coated with the spices. Add the coconut, place a lid on the pan, and turn the heat off. If using tamarind juice, add it at this point. Let it sit for a few minutes and steam the pohe with the residual heat, then add the lemon juice, and cilantro. 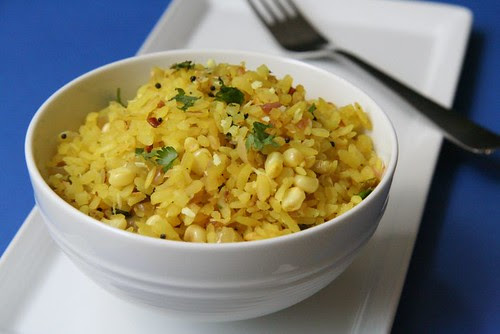 i can never tire of pohe. it looks fantastic. poha papad? that's new to me.

I love poha! And corn too. So this combo is fantastic for me :P

nice combination of poha and corn..

thts a nice new twist of poha with corn - u got me with the post title itself! i love both - so this one is a must-try :)

adding corn is a great ideaaa

It is another comfortingly favourite breakfast of mine! I liked your header too - reminds me of early morning and chirping birds:)

Nice twist, ET. Haven't come across much pohe in my life, and mine mostly sucks.

I have also come to settle for the plain version of pohe after eating the veggie packed ones, but the onions have to be packed in by the square foot for me! :)

gotta' try ur poha papad :) i like to add some shev on top of the pohe.

That looks great and rather different recipe for poha... Corn must be a nice, sweet & crunchy touch.

Haven''t made it in along time. Looks delicious!:)

Poha is my all time favourite. nice entry for the event. perfect look.

Now I remember what I forgot to add to my wish list: pohyache papad.
Nodding in agreement on the cumin in pohe bit.

i'm gujju , and we call it kanda batata poha ! i love it with rai seeds and curry patta, onions and potatoes ...not to mention , green chills, corriander and a squeeze of lime ...yum !
i guess everyone has thier own special way to make it.
I'm loving the addition of corn in your recipe. I would love to try it out.

bee, poha papad is quite prevalent in maharashtra, and so delicious, both roasted and fried. They are not commonly available though, iirc, but small stores that stock very marathi products sometimes carry them. They don't last too long and need to be used up fairly soon. Now that I written up this trivia I am suddenly feeling this urge to have some. On my "next trip list".

A&N, Hetal, skribles, Sagari, Sunshinemom, Bhawana, thank you all for your appreciative comments and welcome here.

Manisha, I am not sure what you mean, but I will take it as a compliment. (?!)

notyet100, sra, Laavanya, Asha, thank you all. Running out of time to respond individually, I am sure you will understand.

Miri, the onions here are HUGE! Hence only half. But of course, one can add as much or little as they like. These things are very forgiving.

Richa, you have never had poha papad? They do go bad soon, so I don't always have them in stock.

TheCooker, amen sister. I can't describe what it is with cumin and pohe, but it is so odd, no?

Kajal, a well made kanda batata poha is always tasty, regardless of what is added in it.