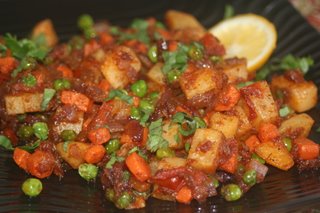 While this sounds like a fancy name, it could also be called the lazy person's route to the real thing by way of what is available at home. Bhaji literally means vegetables in Marathi, and pav is a yeast bread that accompanies it. Pav bhaji, which is a spicy reddish-orange mash of indiscrete vegetables served with the bread toasted in butter, has its humble beginnings as street food in Bombay, but is now found at many restaurants all over the city. I have made it many times now, but never ever have I been able to replicate the taste I remember. It could not be just the amount of fat the vendors use, because I have tried my darned best to cast aside all thoughts of calories and poured in rivers of butter into it, but it refuses to taste as authentic as I want.

I had just returned from a short trip over the Christmas weekend, and before I left, I had cleared most of the fridge. So here I was, getting hungry and with not many choices. It was gusty and rainy outside, so I did not want to go anywhere. There were two carrots in the crisper, plenty of potatoes and onions in the pantry, and green peas in the freezer. There was bread at home and tomatoes too. I chopped up a potato and the carrots and cooked them in boiling water. In the meanwhile, I started chopping up some onion and a couple of tomatoes. Heated some oil and butter in a large pan, added cumin seeds, onion, and tomatoes, and sauteed it till the tomatoes were cooked. Added some garam masala. Drained the other vegetables and added those too. Red chili powder, salt, pav bhaji masala, some more stirring and cooking, and it was done. Chopped cilantro for garnish and a slice of lemon on the side to adjust the tartness. What I did not do in this case was spend energy and time over mashing up the vegetable to a puree to achieve that glossy red effect, but that is why I can also give it a name like 'Deconstructed'.
Posted by evolvingtastes on 12/29/2006 05:58:00 PM 4 comments:

To blog or not to blog was the question for me. For each time I was fascinated about starting my blog, I found a reason why I should not fall to the temptation. So even though I registered the blog name sometime ago, I did not get around to posting anything here. When I finally decided to go for it, I wanted a perfect first post, which was like waiting for perfect weather. Not difficult, but not necessary. So, perfect or not, here is a start.

I plan to keep this as a food blog, for the most part, hopefully with some travel thrown in. Like many other things in life, my taste is food has changed over the years, and I suspect it will continue to do so, in future. Hence the name 'evolving tastes'.
Posted by evolvingtastes on 12/18/2006 08:53:00 PM No comments: